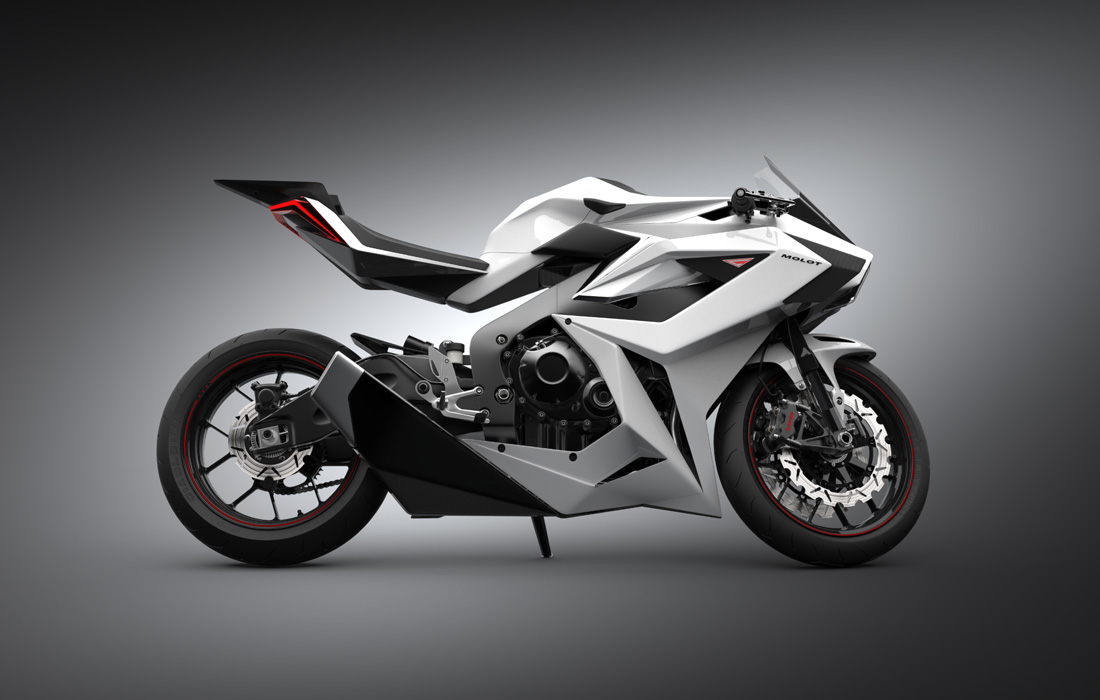 Introducing the Safest motorcycle in the world, the 2015 Molot!

When it comes to choosing a motorcycle, there is not much choice on the market today, the safest is usually the biggest, most of the bikes that have any safety features are the touring bikes but when it comes to super sport you don’t really have much to compare.

In a high tech age that we live in, we believe that it is time to start making motorcycles safer and smarter. ABS has been around since the 70’s but it has just been recently appearing on motorcycles. This is why we are taking what is out there, mature technologies that do not cost a fortune and implement it in to our designs.  Same with manufacturing process, with available technologies we can make motorcycles lighter and stronger.

Molot which Translates from Russian as a sledge or a mallet type hammer, is an aggressive, tough and technologically advanced 1000cc super bike.

Molot is basically a heavily modified 2013 Honda CBR 1000RR ABS version, we believe this is the best motorcycle on the market today, it’s construction design has allowed us to completely strip everything down to the frame, engine and the wheels. The frame itself has been modified to give the motorcycle more of a lighter look. Although, the rear cowl looks very light and fragile it is actually very strong.  We have used aluminum and composites to make it support up to 440 pounds. The design itself is very aggressive and aerodynamic. Every line and indent has been made to serve a purpose. Top of the bike where the handle bars are, has been completely covered, all of the hose and break lines are now stored inside. This way more parts are hidden away from things like weather and the rider.

This is where we believe Molot will stand out.  First, lighting, Molot features all LED light system. Headlights (high, low beams), day time running lights, blinkers, taillight are all LED. Not a single incandescent bulb. LED headlights allow better response time, better visibly and are very durable.  Motorcycle visibility is a huge factor; this is why when you have maximum visibility of a motorcycle, the more chances are that you will be visible to other drivers on the road, day and night. To maximize that we have installed daytime running lights in the headlight and on the side mirrors.

Second, in majority situations human factor is not the best way to avoid an accident. This is where a computer does a better job reacting in a fraction of a second.

Predictive Emergency Braking System (PEBS) has been around on cars for a while, now it’s on a Molot. The system is specifically set up for a motorcycle, in those situations where a millisecond matters in braking.  PEBS works in three types of common situations. Let’s say a car in front of you is coming to a stop, and for some reason you are not paying attention to that. First, once you get in to a minimum range zone, PEBS will send you out a warning, this will be a flashing light on your dash and a light vibration in the handle bars. If you fail to react, PEBS will send a maximum vibration and apply a small amount of pressure to your breaks, if you fail, PEBS will take control of your brakes and apply full pressure to stop the vehicle to avoid a collision. Giving that Molot has ABS you would not lose control of the bike. PEBS will also work in a situation where you do not have any time to react, if a car suddenly breaks in front of you, PEBS will apply full pressure to avoid collision. PEBS works with two radars up front, one short range and long range and an HD camera that is mounted in the headlight.

In Addition to PEBS, Molot is equipped with blind spot monitoring, There are two sensors located in the rear cowl of the bike, one on each side, once you are ready to make a turn, a blind spot sensor will detect that there is an object and will send you a warning which is a light on a side mirror and a vibrating pulse in the handle bars.

Then there is a lane Departure Warning System (LDWS), let’s say you are distracted from the road ahead and your bike stars to swerve to the left, LDWS will detect that you are departing from your lane by giving you a pulse vibration to the handle bars. The system is disabled when you turn on your turn signal.

There is also a safety cut off feature, Molot has a built in gyroscope, it detects any anomaly in vibration and control, which means when you enter an uncontrolled situation, Molot will disable throttle. (This feature can be disabled)

Another safety is a build in HD cameras in the front and in the rear, weather you are on the track or your bike is just sitting in a garage, cameras will record everything that will move, 24/7.

Every single piece of data is stored in the so called black box, similar of what you would find in a plane. The box itself is enclosed in a damage resistant material making it tough, water and heat resistant.

The unit itself can be easily accessed from the rear cowl. All of the data can’t be erased or modified, it can only be copied. Camera recordings will automatically erase after the disk drive is full. You will see an indication on the dash when the hard drive is near its full capacity. Giving you time to copy needed information on an external drive.

We have also used a small but powerful lithium ion battery instead of a heavy, bulky lead/acid battery.

All of our bikes are handmade to ensure the highest quality and attention to detail.